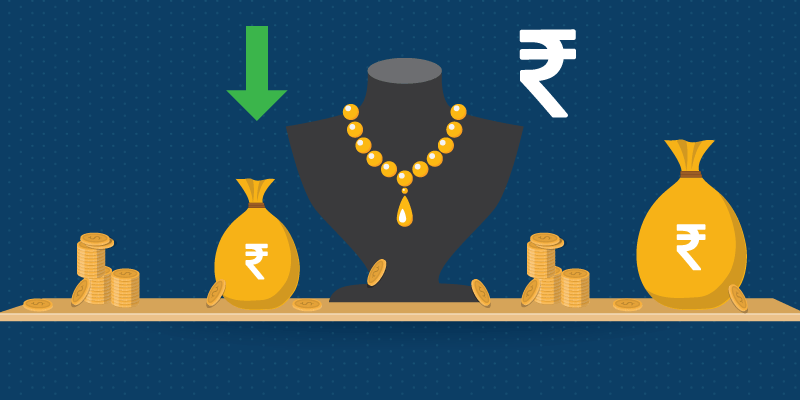 What’s common between tennis star Rafael Nadal and gold prices? Obviously the fall. If Nadal’s wins and the gold prices were linked, and if he’d won two of the four grand slams in 2013, the gold prices would have been at a majestic Rs 2,910 per gram (22 carat) in October 2013.

But the reality is that Nadal is struggling to get past the initial rounds of a grand slam and the gold prices have dipped to Rs 2,510 per gram.

So what’s taking the sheen off the India’s gold and why is the favourite investment option giving investors jitters?

Here’s a lowdown on the top reasons for the fall of gold prices in India.

Price and demand are always hand in glove. The economic slowdown in China has cast a shadow over the yellow metal.

Below Normal Rains this Monsoon

In India, most things revolve around the monsoon and gold is no exception.  As two-thirds of the gold demand comes from the rural areas, a weak or below normal monsoon means low agricultural productivity and less money in the hands of the farmers.

The rural populace love to buy gold as the banking infrastructure is poor in. The lesser demand pushed down the prices of gold.

The stronger the dollar the bigger the problems for people using weaker currencies. The dollar strengthened against the major currencies of the world after the US economy stabilized following a stormy period.

It should be noted that many commodities, including gold, are dollar-denominated. Whenever the greenback gets stronger, people dealing with weaker currencies have to shell out more money to buy gold. This adversely affected the demand and the prices went further southwards.

Concern over US Federal Rates

Speculations were rife that the US Federal Reserve will hike the interest rates in its September meeting. The rates weren’t increased this month, but the speculations pushed down the prices. The investors shied away from investing in gold as they were worried about getting no interest income or dividend.

With US Federal Chief, Janet Yellen, making a statement about the interest rate being hiked at the end of the year, another round of speculations have begun. All these result in lesser demand for gold, as no interest income is expected.

Vagaries in the International Commodity Market

In this globalized world, there is much more to the adage, ‘when US sneezes the world catches cold.’ The developments in Greece have sent shivers down the spine of other countries.
The Greek debt crisis had a negative impact on the commodity market and the gold prices took a beating.

The geo-political developments in any corner of the world can upset the pulse of the commodity market. Another example is Iran’s nuclear deal with six major powers to freeze the Arab nation’s nuclear programme.

Is it Worth the Wait?

The stock market and commodity market are cyclical. There will be ups and downs regularly. In the case of gold, there was a great bull run between 1998 and 2011, when the prices of gold travelled northwards.

Steeper the rise harder the fall.

But, this should be seen only as a correction and not a bearish run. Come the festive season, and the gold prices will rise again. Investors can hold on to their gold for a longer period and make some profit. This is also the best time to buy gold.

The universe is in your favour if you were thinking of buying some soon. Lucky you!